A Short Chat with John Lowrie about Voice Over 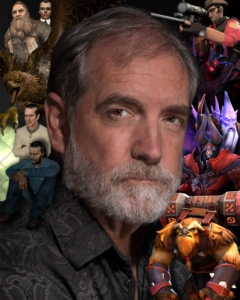 John Lowrie will be teaching a 2-day Voice Over workshop in August. Here John talks a little bit about the class, his career, and what kind of voice is good for voice acting.

Q: Can you start by just giving an intro to the class?

If we have time I’ll get into how to use your voice to its fullest extent, make it flexible, be able to learn other accents and dialects, and make your voice higher and lower. Basically it’s three main sections: the basics for how to get into the business, the various kinds of voice acting that there are, and then the actual acting itself–the toolbox that you need to have full to be a voice actor.

Q: Would you say this is best for absolute beginners or people who have some experience?

A: I’ve taught it at fan conventions over the years, and I’m really used to dealing with everyone. The best way to teach is individually. I have a lot of experience at tailoring the training to the individual person, what their foundation already is, and how this information will fit into what they already know. What I’m doing is teaching two five-hour master classes. I’ll have plenty of time to give each person individual attention, and make sure that they know where they are and what the next steps are.

Q: I’m sure something you’ve encountered is that many people can be self-conscious about their own voice. How do you encourage people to lose that self-consciousness?

A: Self-consciousness is one of the challenges about acting in general. The way that I find works the best is to get in character, and there are lots of steps you can do to get deeper and deeper and deeper into character. Remember that it’s not you as a person who is reciting these lines, it’s the character who’s reciting these lines. So the more that you can invest yourself in wondering what the character wants, then all of a sudden you’re not in a voice acting class, you’re not trying to impress a voice acting teacher, you’re not trying to win an audition, you’re just trying to get the magic chalice or kill the dragon or whatever the character is trying to do. I find that is a really good method–that if you concentrate only on telling the story, only on being in the story, then your character has never met a director, has never met a voice acting teacher, has never met other voice acting students. They’re just a person in this situation trying to get done what they want to get done.

Q: Can you talk a little bit about your experience? What has led you to the point of  teaching a voice over workshop at Freehold?

A: Well I did my first voiceover gigs back in the 80s for a radio station in Bloomington, Indiana that’s attached to Indiana University. I did a couple of commercials for them. When we moved out to Seattle, I got an agent and started doing voice overs for commercials and industrials. In about 1995, people like Sierra Online and some other voice video game companies started sending out auditions and I auditioned and started getting games. My first game I believe was Spy Fox, and then Betrayal of Antara. I’ve been in about 25 or 30 video games now. I did some work for the game Half-Life 2. I was in a couple of the Halo games, I was in InFamous, Lord Of The Rings, and The Matrix Online. So those are just some of the games that I have voiced. There have been lots more.

Q: Last question: Is there a prototypical student you have in mind who would benefit most from this class?

A: I would say that if you feel like you look weird and that your look might prevent you from acting well, voice acting is a great place to go. But I would also say if you feel like you sound weird, that is not an obstacle. They need all kinds of voices. My teaching style is very inclusive and I have never met anyone who couldn’t make money doing voice work, particularly in video games. In video games you just have all kinds of characters. It used to be that the stereotypical voice actor from the 70s and 80s was a guy with a voice like mine, who could say stuff on a commercial, and you believe me because I have a deep voice, but that’s really the farthest from the truth now. Even in commercial work it’s not true anymore. If your focus is theater acting or film acting, it’s still a good idea to look at what voice acting is, so I really can’t think of anyone who is interested in acting at all that wouldn’t benefit from this class.