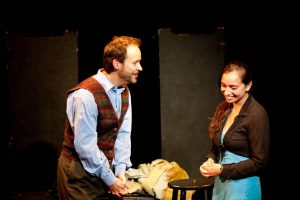 Though I have a BFA in Theatre, I hadn’t been on a stage in 6 years when I arrived in Freehold’s Basic Scene Study class in the summer of 1998. Althea Hukari was teaching, and I definitely wasn’t sure what to expect. Having been so burnt out at the end of my undergrad program that I never thought I’d do theatre again, it was a surprise to discover I had the itch to perform again. Though Mark Jenkins recommended I take his Advanced Scene Study class (lately taught by Kevin McKeon), and I definitely felt starting at Intro to Acting wasn’t for me, the advanced class felt too intimidating after having been away from theatre for so long.

Basic Scene Study, however, was just my speed. Not only did I have amazing classmates I quickly bonded with, but I got to revisit some skills I hadn’t used in several years, on one of my favorite texts: The Seagull, by Anton Chekhov. Althea had everyone do scenes from the Chekhov canon, and I found myself in the Arkadina/Trigorin fight scene in the middle of the play.

As a then-fat actor, I was surprised to be cast as Arkadina in such a sexy scene. Part of my burnout in college was due to always playing roles I was NEVER going to play when I got out of school, or at least not for decades: middle-aged mothers and grandmas (and the occasional brothel madame), because fat equals age to undergraduate casting directors lacking imagination. In fact, we had done The Seagull in my program, and though I got called back for Arkadina, I ended up getting the part of Masha’s mother, Polina.

My scene partner and I had such an amazing time rehearsing our scene, and then we’d come into class and Althea would coach us to hone it for our final performance on the last day of class. Besides allowing me to play a role I NEVER would’ve seen myself in, (and thus allowing me to see myself in a different light), she encouraged us to take risks with our characters I might’ve been afraid to take in the past. Through different exercises and approaches, Basic Scene Study helped me begin to reawaken my confidence as an actor – so much so I took it again that fall (to explore Sam Shepherd scene work this time) and once again built on the skills and hard-won confidence I started to gain in the first class…and eventually, several years later, FINALLY took Mark Jenkins’ Advanced Scene Study class when I felt I was ready.

Basic Scene Study changed my life by helping me change some outmoded perceptions of myself and sink my teeth into some great text with an instructor who treated me like a viable actor and human being, and even if I had never stepped foot on another stage, the confidence and skills I gained improved and enriched my life, and I highly recommend the class to anyone looking to improve their skills and dive into some rich, intense scene work!