Thanks to essential funding from Historic South Downtown, 4Culture, and the Seattle Mayor’s Office of Arts and Culture, Freehold is in the next stage of transforming the Benjamin Bullitt Black Box into a fully flexible performance space with the technical capability to support diverse, artistically ambitious, independent productions, dance performances, film screenings, multi-media events and community meetings.

This stage of the process is all about lights and sound:

Below is an account, by Caleb Pierce, of a couple days’ work inside the theatre!

Today we drilled holes into the remaining supports for the steel brackets. This task was quite involved. It was a constant battle of alignment, measuring, and leveling—not to mention the handling of the nifty but heavy electromagnetic drill press.

I worked with Shelby Choo, an excellent and experienced Seattle theater tech person brought on by Steve Coulter, our project lead and veteran theater technical director. We made a pretty good team trying to wrangle that heavy drill. If we dropped it, it probably would have gone through the floor and into the dank nether realm predating even our predecessors. Thankfully, we managed to keep our spines and arms intact through the process. The drilling itself was a dual-effort as well. While one of us operated the drill, the other kept the drill-bit cool with a constant, thin stream of 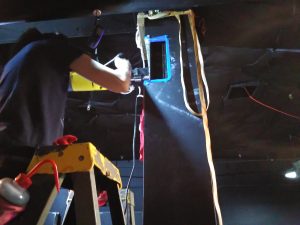 oil-water mixture. This liquid was squeezed from a bottle with a thin, curved nozzle evocative of an oil can in the hands of a 1920’s factory maintenance person, like a certain Charlie Chaplin movie.

With all the holes drilled, we bolted the brackets tightly in place, which once again involved much effort in alignment and leveling. Apparently, it’s important to be pretty exact when you’re dealing with heavy steel intended to support heavy pipes and lights. So that’s what we did. Most of these efforts are not obvious from the photos. But it’s a thing.

Finally we had the relatively fun task of breaking the old HVAC duct into three pieces. The first half of this task had no glory or glamour. It involved gummy gunk and tiny nuts and wrenches that would not hold still. Then we had our vengeance on the duct. We stomped and twisted and folded-over and band-sawed and snipped, and the results were— as hoped—three pieces of duct. I would love to go into detail about how we got the thing off the ceiling. There might have been some alarmingly precarious screws and maybe some unexpected organic matter. But that was yesterday, and this entry only concerns today.

The stuff in Studio 2 is for the soundproofing of the elevator shaft. The stuff under the tarps (see photo below) is stuff under tarps. 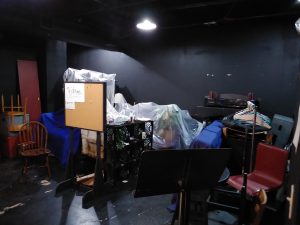 Also included is a deceptively cheery photos of the post-dump-run Mezzanine. Look at the space! Look at the sunlight! Look at the clever photo angle that conceals a project for another day! 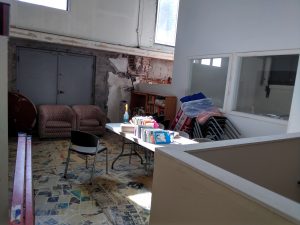 Today we lifted most of our 500+ lb steel beams around 10+ feet (that’s what my eyeballs tell me, anyway) into the air and mounted them onto the brackets. For this task, Steve rented two hand-cranked Genie lifts, which we brought into the space with the help of our whimsical yet—statistically speaking—reliable elevator. Each lift is capable of lifting up to 350 lbs. Cool.

So Shelby and I cranked away in sync (she had the less functional machine, and therefore all the more impressive for her effort) all day long, when we weren’t measuring, aligning, strategizing, ratcheting, coaxing, levering, tugging, pushing, lifting, prying, and bolting in the service of putting together a rectangle of steel that one could call “pretty much squared.”

Steve wisely decided that we begin by mounting the heavy, unwieldy, and generally annoying “dog-leg” beam (the one that’s not just a straight beam). After this, we mounted the beam that was meant to be more-or-less parallel with the dog-leg. The 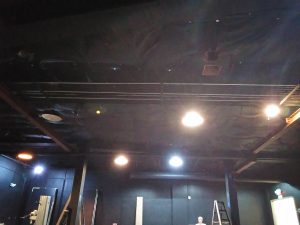 “parallel” part certainly required time and ingenuity, as well as a lot of patience, gesturing, and wholesome finagling. Also, it was an interesting task to thread (strange though appropriate word, given the context) our beam between two huge water pipes, which have given and will continue to give us grief, while making sure our lifts did not snag onto a certain inconveniently-placed bundle o’ tubes hanging from the ceiling. Steve calls that bundle “the conduit.”

As we worked, we were forced to take down work-light after work-light, since they often hung in the way of what we were doing. It was hilarious in a way, but it also seemed to decrease the amount of light we had. Thankfully, we have quite a few spare equity lights sitting around here at Freehold Theatre. As Shelby remarked—and I very much agree—our setup began to look more and more like a “weird art project.”

There remains the final beam before we lock everything into place. I described the dog-leg as challenging. This final beam seems like it will be challenging AND a pain-in-the-ass to boot. On the bright side, it will be the last beam, and our energy will be relatively fresh tomorrow when we attempt to install it. 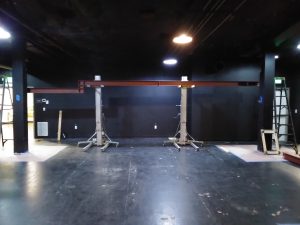 Freehold’s Black Box Renovation is Made Possible by the following Organizations: