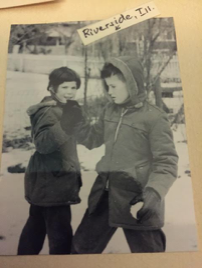 What Participating in Studio Series 2020
Meant to Me by Tom Heller
“Living truthfully under imaginary circumstances,” a mantra articulated by Sanford Meisner, is the cornerstone of Freehold’s acting program and is what has thrilled me as an acting student and what satisfies me as an audience member whenever I see and hear and feel it realized on stage. Freehold besides offering critical training in voice and movement and improv and scene study and numerous other skills is all about honesty and shedding whatever gets in the way.
As challenging as “living truthfully under imaginary circumstances” is for the beginning actor, it is in some ways easier than doing so under actual circumstances! We live so much of our daily life heavily defended—living “inauthentically,” as the existential philosopher, Martin Heidegger would put it. Never was this more apparent to me than when my sister in researching a book about our parents’ lives in Europe sent me a document she had uncovered—testimony our father had given to a US Senate subcommittee detailing atrocities he had witnessed and experienced while a prisoner in the German concentration camp at Buchenwald. “Did I never tell you,” I wrote back to her, “I found that testimony in our basement when I was eleven?” My sister was horrified at the trauma I must have felt reading this testimony at such a young age. I realized I had stuffed that trauma, had no recollection of its emotional impact on me though I remembered being drawn again and again to the basement to secretly re-read the document.
It was to reclaim that experience, to live truthfully in that actual circumstance that led me to pen the monologue titled The Inheritance that I performed during January’s Studio Series. My first draft fell short in the honesty department. While I shared the trauma of discovering at a young age horrible details of my father’s concentration camp experience, I professed ignorance as to how that has lived inside of me, simply alluding to the fact that I have no difficulty accessing tears when imaginary circumstances so demand. Pushed by my director, Charlotte Tiencken, and my mentor, Dan Morris [As a participant in the Studio Series you work with a Freehold-approved director and mentor] to explore ever more dangerous territory, I was able to access how my father’s suffering has reverberated in my own life, and after four or five more drafts found the words and the courage to share that with an audience.
My rehearsal process with Charlotte I would call a monumental experience. The first time I read my own words to her, I couldn’t finish the text without bursting into sobs with almost every paragraph. “Tom, this is theater, not therapy,” Charlotte gently chided me. With repeated readings and with guidance from Charlotte and Dan, I felt I was able to bring what nascent acting skills I have to the characters I had created—myself as the adult son, myself at eleven years old, myself now 60 years after the discovery.
Performing The Inheritance before a Freehold audience was a gift for me. I loved taking classes at Free-hold back in the 90’s and early 2000’s and felt an enormous sense of gratitude toward my teachers and a sense of belonging in the Freehold community. A change in my work life resulted in my living overseas for 14 years with no opportunity to continue thespian pursuits, returning to Seattle in 2018 and soon thereafter reconnecting with Freehold and starting all over again. Performing in front of treasured teachers, fellow students, friends, and members of the Freehold community whom I don’t know just seemed right to me. I’m so glad I did it!!!
As for the piece, I’ve shared it with Seattle’s Holocaust Center for Humanity and may incorporate it into school presentations I intend to give as a “legacy speaker” now that there are few remaining Holocaust survivors who can share their stories first hand. In this time of rising anti-Semitism and emergence of neo-Nazi organizations whose members are young and unacquainted with history, I hope continuing to perform The Inheritance or having a video of it accessible at the Holocaust Center can serve as a small antidote to those movements so we can confidently continue to say: “Never again.” 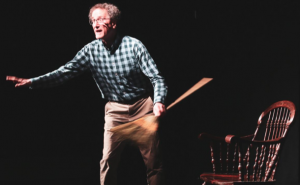