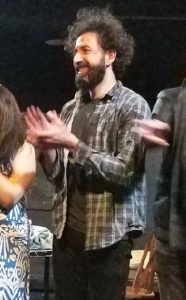 Meisner class had been a great revelation to me. The first two quarters helped me immensely in discovering the process and tools for exploring a character, imagining the circumstances and preparing for a scene that I would struggle with before.

But near the end of the second quarter, it was very disheartening when Covid-19 measures made it impossible to continue our classes in the normal manner. We weren’t even sure how and when the third quarter would continue. But Freehold and especially Robin made sure that our learning doesn’t stop and we transitioned to online classes.

It was a little challenging in the beginning. I was unsure how exercises and rehearsals would be done online e.g. without physical touch. Though I soon found out how it got realized in our scenes so easily and seamlessly as we would speak the physical actions we were performing and let that sink in our imagination and respond to that. That process only helped me in heightening my imagination.

We would start the class with physical movements like we would do normally. Everyone just did whatever movements they could in their space. When running through a scene, we would prep before the scene as usual. Setup physical space as much as possible. It didn’t ever feel forced or uncomfortable. We had to work with a lot of focus on imagination though. Pretty soon, everything felt familiar. We were going through the same progressions and being physically in separate spaces from others didn’t bother me at all.

I found repetitions over the video so moving. It just affected me more when I had a close view of my partner’s face and could see changes in their expression so clearly. Unlike the normal setting, there was no way for me to block out what I was getting from them. Zoom sessions had their quirks as well like sometimes the video would freeze or the audio and video would get out of sync but all of that actually fit with the repetition itself. It made me listen and observe them more intently. It also added to what each of us were getting from each other. Like the amusement when my partner’s video froze in a weird pose or frustration when they didn’t hear me, those moments just transitioned naturally in the repetition.

Also personally, doing online classes during the early quarantine period was very uplifting for me to see and hear from familiar faces every week when everything else around was shutting down and people were staying apart.

After a little while as some restrictions were lifted, we started doing activities and rehearsals in a park. We would meet in a small group under the limit. It was voluntary and we had the option to work on Zoom but Robin made sure to have the environment safe for us. She would come prepared with hand sanitizers, gloves, masks and cleaning supplies that everyone was super comfortable to go out in the park.

It was really great to get out and work on our feet finally. We rehearsed our scenes with gloves and face shields on! I felt a little nerdy with face shields initially but I found being in a park tremendously useful. It was confidence boosting that I could prepare and engross myself in character circumstances in an open outside space. One park experience that helped me a lot was that we were to do the character exploration as an animal. I was a little hesitant if I could move, make sounds and be present fully as an animal in the park but I realized it was a great way to learn to cut the outside world and leave any inhibitions at the door.

Meisner was an amazing learning experience and the pandemic might have slowed us down in the beginning a little, but Robin made sure that we learned, enjoyed, and finished the class stronger and together. Pandemic 0 – Robin 1 🙂

The 9-month Meisner Progression runs every year beginning in the fall, taught by Robin Lynn Smith. Interviews typically happen in the summer. If interested, contact the Freehold office at 206-323-7499 or info@freeoldtheatre.org to be put on an “interested” list, but be aware things may happen differently this year, due to the COVID-19 pandemic.