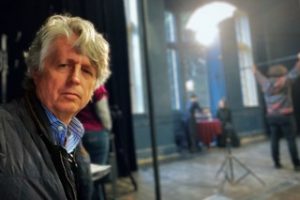 JJ’s Favorite Film Class
by John Jacobsen
What do John Ford, Andy Warhol, and David Fincher have in common?
Ford, asked what the audience should watch for in a movie: “Look at the eyes.”
Warhol: “The great stars are the ones who are doing something you can watch every second, even if it’s just a movement inside their eye.”
Fincher, on the big club scene in The Social Network: “What’s cinematic are the performances . . . . What their eyes are doing as they’re trying to grasp what the other person is telling them.”
There is no art, Shakespeare’s Duncan says in Macbeth, to read the mind’s construction in the face. Good ol’ Bill is right about the reading part; we grasp expressions fast, intuitively, and often reliably. But there is art in the performer’s construction of the face, and in the director’s cinematic shaping of it. So we’re going to watch the eyes and choices of actors, but also come to understand how the writer, the director and the editor all saw the story being told.
This class, however, is not just for filmmakers, directors, writers, and actors, but it’s also great for people who just love movies. Every week I’ll assign you a movie to watch on your own at home. I’ll also make sure that film is available to you through multiple platforms (like Netflix, Amazon Prime, YouTube, Hulu, etc…) so it is easy and maybe even free to watch, but they’ll all be from my favorite movies list. So get your popcorn and settle in on your couch and enjoy an amazing movie. That’s always a joy.
But I’ll also assign you one thing a week to watch for in the film and then, in our class time online, we’ll discuss that topic and also go through parts of the film online which I’ll talk over and give you insight on. It’s really fun to watch scene by scene and moment to moment and examine the script, the shots, the edits, the soundtrack, the story, and the film’s overall meaning and subtext. You’ll learn how almost all movies, and stories as a matter of fact, have a very similar structure, why this structure is so important, and how to recognize it; you’ll learn how movies are made, how shots were executed and why, and walk away with with a fluency in and understanding of film’s unique, beautiful language.
_______________________________________________________________
John Jacobsen’s Let’s Watch JJ’s Favorite Films online course begins Thursday, April 16th! Take a break from quarantine uncertainty and join the virtual classroom community of film enthusiasts – more information and registration links can be found here.