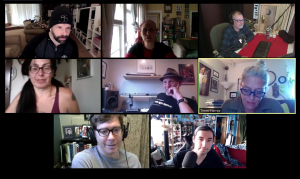 March 11: Producers cancel remainder of the play A Series of Small Cataclysms

March 23: Stay at home order in effect for WA

March 26: I participate in a Zoom play reading of David Mamet’s Boston Marriage

June 22: We perform our fifth show

When the whisperings began of a virus that could disrupt all our lives I was performing in a play about the apocalypse that had already lost a week of performances due to an illness in the cast. We had joyfully resumed production and performed for a week, and then we shut down for good amidst the burgeoning fears of the contagiousness of this new virus, this Covid-19.

I had left my job in mental health at the end of 2019. My compassion for others worn thin and desperate to work on my Art “before I died!”; a dramatic comment but one I felt strongly and suddenly during a work training in Dialectical Behavioral Therapy. I began working hard on a screenplay, I wrote a monologue and performed it, I studied and worked on my voice over career, I bought a camera. I was doing it, I was being an artist FULL TIME.

But after the play closed I began a rapid descent into bitterness. I catastrophized and became afraid I would never see my daughter or my boyfriend again. I contemplated scenarios of hundreds of hearses, ambulances and paddy-wagon like trucks cruising around Seattle picking up the dead, many of whom I would know. The uncertainty and disappointment poisoned my mind and I thought and often said aloud, “What’s the Point?”

I received an email from Carolynne saying she was participating in play readings online. I was reluctantly using Zoom for 12 step meetings (HATING it) so I was familiar with this tele-conferencing platform. I immediately responded that I would love to be a part of a future reading, recognizing that this was a chance to connect with other artists and to practice what I loved. Pearl contacted me a week or so later with an opportunity and I participated and I LOVED IT. There was a small audience in attendance and we all had a great time because we were again experiencing art together. (Zoom isn’t the ideal venue for theater; if you try to pick up another actor’s line most likely your voice will cut out; two people cannot talk at one time. Your levels can peak very quickly without your knowing how loud you are, and if you yell or scream forget it, your mic will cut out entirely. You don’t know if your audio is breaking up, if anyone can hear you or if your video has frozen you into an awkward position, mouth half open perhaps, hands mid-flap.)

I was beginning to use the phone more, grateful to talk with another person. Isolation is terrifying to me and I was desperate to find any means out of it. I called my friend Ryan Sanders and asked if he was interested in doing online play readings. We discussed what kind of material we’d like to do and the current hindrances: no bookstores or libraries were open, shopping on Amazon wasn’t yielding two day deliveries. No printing places were open. Finding free scripts online was unlikely, most were available for purchase through Dramatists Play Service or the like, and would take days or weeks to reach us. Movie scripts were not particularly adaptable to Zoom, too many camera directions to read and not enough dialogue. And then I remembered radio theater.

I was a big fan of radio theater, first listening to the CBS Radio Mystery Theater as an adolescent. My father has told me his memories about the shows he listened to, like The Whistler. I soon found several sites that had free radio play scripts from the 1930’s, 40’s, 50’s that were all around 30 minutes long. I set about recruiting other likely suspects to join in this project and found 5 of them I called the project Quarantine Radio Theater and for our first show we performed a crime drama about John Dillinger and a comedy called The Easy Aces. We invited a small audience and got good feedback. It was fun! I set a pace for our company of a rehearsal and performance every 2 weeks or so, wanting our pursuits to feel regular and like something you could count on tuning in for. We began to invite more people and added another rehearsal. We found a sound effects engineer and a music person.

We have consistently gained more audience members and receive donations that we split within the cast and crew. All but one member of our cast has worked with Robin Lynn Smith; Ryan, Timmi, Carolynne and I are all Freehold alumni and David and Hugh studied at Cornish. We have created a small community and given ourselves work.

The idea of sitting in a theater or performing on a stage seems quaint, slightly dangerous and unlikely in the near future. I try to be optimistic and believe we will return to the spaces I love together, audience and performers in the same room. I hope we can all find ways now to use what is available to express ourselves – These are the times we are living in and I refuse to let that time go by without extracting every bit of sweetness, beauty and struggle – ART – that I can.

The next Quarantine Radio Theatre show will “air” on Sunday, July 26 at 2:30. If you’re interested in viewing/listening, please contact marketing@freeholdtheatre.org to receive the Zoom link.