On the day before Rehearsal and Performance began I was still battling indecision about whether or not to take the class. Delayed start dates had given way to an online format for at least the initial classes. Just a few months earlier I would have considered online acting classes to be practically the definition of absurd and yet here we all were, forced to choose between that new reality and nothing.

What ultimately convinced me to take part was the realization that as actors our undertaking is always to deal with the given circumstances of our character. The more challenging, the more interesting. It was time for me to accept that my given circumstances as an actor during pandemic times are part of that challenge too.

Our initial class meetings on zoom were indeed challenging as we all adapted to the realities of this new format in an acting context. Group discussion was difficult and there were lots of awkward silences and unanswered questions as we tried not to talk over one another. The physical life of the play was difficult to envision as we attempted to breathe life into scenes from our individual little boxes on the screen. Starting on zoom also meant that we didn’t have the opportunity to really meet one another, talk casually, or build relationships in the early stages of working together.

On the other hand, zoom seemed to me quite conducive for the audition and self-tape exercises we did before starting on the play, and for working on getting our lines memorized. Despite not being in-person, I found that I really looked forward to our rehearsals and that they were a hugely welcome creative outlet.

About halfway into our two-month class small group gatherings became a possibility and so cautiously but eagerly we began in-person rehearsals. The need for masks made reading each other’s facial expressions a challenge, but once we got started I found that the world of the play took over and I almost forgot we were even wearing them.

I am truly grateful to my fellow actors and to Freehold for being open to finding ways that we could safely work together in person. This last month of rehearsal did wonders for helping me to discover and understand new elements of the play. As an ensemble, being physically together enhanced every aspect of our work, from timing, to moment-to-moment truthfulness, to physical interactions and beats.

The format for our final performance was somewhat up in the air right until the very end. Would we be able to perform live for a small socially distanced audience? Would we film the play? Would we be able to do a taping without masks or not? In the end we decided together on a taping wearing masks, with the possibility of a live performance at some time in the future. Obviously it wasn’t anyone’s first choice, but it was what we could do under the circumstances. For me though the process of working on this play far outweighed anything else in importance.

Looking back, what I gained from this class was the chance to work with a wonderful director and group of fellow actors, a setting in which to put into practice what I’d learned from scene study classes in the context of a full play, the precious opportunity to create in-person theatre during an extremely isolating time and, interestingly, some insight from the characters themselves on coping with times of crisis.

Reflecting on parallels between the play and real life right now I noted in my journal:

There is never a convenient time for a crisis. Working on this play, both as a character and as an actor, has highlighted for me how when emergencies happen, there we stand in the middle of our messy lives and best laid plans, interrupted and laid bare. But, as in the play, when circumstances thrust us unexpectedly together (or apart, as the case may be) forcing us to pause, we have the opportunity to regroup. To consider, as the trappings of our regular lives fall away for a while, Father Doherty’s question, “What manner of persons ought we to be?” May we all come away from these moments in our lives with new insights and grow, as in Angels Fall, with the help of loved ones and strangers alike. 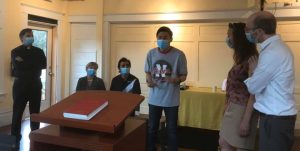