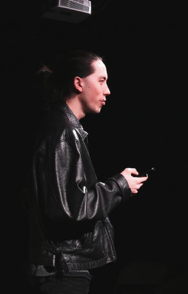 My Studio Series Experience by Caleb Pierce
The Studio Series meant several things for me. I was involved in three projects. Two involved scenes from plays. For those, I collaborated with Freehold students I had taken class with. The third was a solo piece.
The experience of the collaborations was cool. The Studio Series culminated in several performances in front of a live, somewhat-public audience. So there was a healthy amount of seriousness and pressure built into it. On the other hand, we didn’t have the external pressures of producing a full show and answering to a hierarchy of people, which freed us to experiment with our approaches to acting. This was immensely beneficial to my growth as a performer.
When I’m in a class, I can become preoccupied with theory and a need to please the teacher. The Studio Series was an opportunity to set those things aside and tune-in with my intuition. It was a time to ask things like: “What am I doing? What do I want out of this? How do I want to do it? What’s helping? What’s not working?”
It wasn’t always great. There was plenty of frustration along the way. But the frustration was vital and a potent catalyst for growth. I think I have emerged a much better actor.
My solo project was an excellent experience. It was the perfect answer to that part of me that is eternally unsatisfied with things I see – the part that constantly asks the question: “What the fuck would I put on a stage? What is worth giving to an audience? How can I justify having fifty butts sitting there, spending their limited mortal hours watching and listening to me?
Apart from technical and time constraints, the project was effectively open-ended. I was the writer, performer, and designer. I was given guidance and feedback from my excellent mentor Matt Smith and my talented friend Luis (a.k.a. Arrietty Fatale), but I had near complete directorial control as well. So this was a pretty comprehensive confrontation of my artistic identity.
In practical terms, this meant a great deal of agonizing, uncertainty, and endless revision. It was a great lesson in bridging the gap between ideas and execution. With innumerable ideas in the trashbin (not that I didn’t occasionally poke around there in vain hope), I found myself faced with the big deadline. So I took what I had written, though it didn’t seem good enough, and committed to it.
As the performance loomed, it quickly became apparent what worked and what didn’t; what could use improvement and what was still missing. I would argue that the background work had begun long ago, but the final week was when the rock’n’roll work began. By dress rehearsal, it finally felt like I had something concrete to give.
Alas that there were only three performances! But what a blessing that there were not one or two, but three! Each performance was a revelation. I became increasingly relaxed and better understood what I was trying to do. Complacent satisfactions turned bitter and frustrations revealed themselves as excellent opportunities. Again and again I realized: “This ain’t what I thought it was.” By the end I was left with the understanding that I had done something that had meaning, and it was my own. The confidence this has brought me as both a performer and a person is invaluable.
To anyone considering the Studio Series, who fears they are not good enough, I would say to do it. The shit will hit the fan at some point for anyone who’s trying to do something worthwhile. You might find yourself mighty anxious and fearful when it happens. But it’s a beautiful invitation and challenge to do something better than you thought you could, and you’ll emerge with something of great value.
_______________________________________________________________
Freehold’s Annual Studio Series usually runs in the first quarter of the new year. Applications will be available towards the end of the summer for next year, if you have any creative and wonderful ideas brewing for your own project! For more info, email marketing@freeholdtheatre.org.