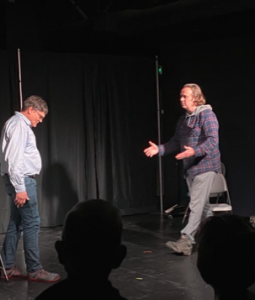 Working on It at Freehold’s Studio Series
by Randal Foss
I originally started to perform improv in Chicago in the late 80’s. I fell into the improv world almost by accident: one friend wanted to go skydiving and the other wanted me to take an improv class. I chose improv and at the time I didn’t realize the freefalling similarities! I performed in Chicago for a few years and then said goodbye and headed to Seattle.
After about seven-years’ hiatus from performance I mentioned to a stranger that I wanted to explore performance again and he wrote “Freehold” on a dollar bill and I was off and running. Acting I, Scene Study, the Meisner ride and two Studio Series performances that led to performing theater around Seattle. After another hiatus, I landed at Unexpected Productions (UP) and after a few refresher improv classes started a ritual of performing improv at UP’s Duos Showcase, where I eventually met my improv partner Steve and Kevin, our director, both of whom I am blessed to be associated with and make me a much better performer.
So, when I was asked if I wanted to perform in the resurrection of the Studio Series, I felt privileged and honored to come home to a place that had nurtured me as a developing and may I say, still developing artist. The acting skills I learned at Freehold applied directly to what I learned in improv and being present on stage. Skills like filling yourself with preparation, so you can empty your vessel before entering the stage and be present, alive and alert; listening only to your partner(s), while feeling the entirety of the space arising out of the undiscovered belly of attention, rather than from a controlling, fearful place of anticipated invention. As Kevin says, “discover what reveals itself based on the immediacy of what is happening, rather than a contrived invention of the mind…AKA thinking.” And then the characters and story arise out of themselves, as the actors are as surprised as the audience by what unfolds before them, 20 minutes each night, the improvisors and the audience, pure discovery…how intimate and exciting!
Though each time we performed our piece it was improvised, we rehearsed for many hours over a period of months in order hone our skills to the point that Steve and I could sustain 20 minutes of coherent improv, while inhabiting multiple characters within multiple environments, if called upon. Our inspiration was TJ and Dave, an improv duo in Chicago who performed the same format for hour long sets a couple times a week over a period of years. Steve and have I have been performing together for a few years and have become accustomed to performing short duo pieces or longer collaborative pieces (5 to 10 performers) in a format called the Harold, but for two performers to discover 20 minutes live was a challenge.
I love improving with Steve because of his love for the art form, and his ability to improvise makes my part of the performance easier and a lot of fun, as he always surprises me! However, without Kevin’s direction I’m quite sure our enterprise may have resembled a disaster. Kevin’s extensive experience and patient, yet consistent insistence on discovery rather than invention; paying attention while responding truthfully only to the next thing your partner does, no matter what it is, was just the guidance we needed to take the next step in our improv evolution. So, by the end of the rehearsal process, 20 minutes felt like 10 and now our goal now is to work with Kevin to be able to perform an hour-long set.
So, thank you Freehold for offering a platform where we can take chances and explore. The name of our group is Working On It and we are doing just that, working on it! It has truly been a pleasure to be associated with all involved, every night I can say that we were proud to be part of the ensemble. Looking forward to next year!
_______________________________________________________________
Freehold’s Annual Studio Series usually runs in the first quarter of the new year. Applications will be available towards the end of the summer for next year, if you have any creative and wonderful ideas brewing for your own project! For more info, email marketing@freeholdtheatre.org.